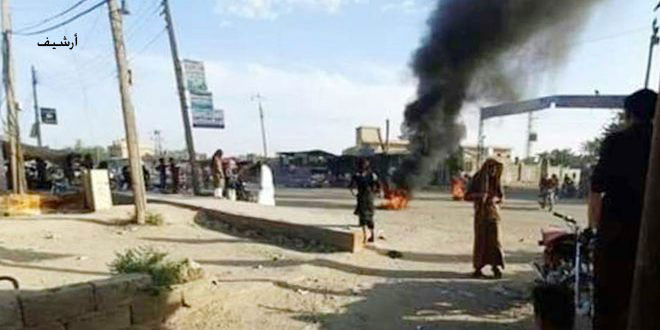 Hasaka, SANA- US occupation-backed QSD militias continued their assaults against the locals in Hasaka countryside as they kidnapped a number of youths in al-Shadadi city to recruit them by force to fight with them in Hasaka and Deir Ezzor countryside.

Local sources at Hasaka southern countryside said that QSD militias kidnapped a number of youths in al-Shadadi city and its surrounding villages and took them to the training camps so-called “Self Defense Duty”.

On Tuesday, QSD Militias kidnapped 9 civilians at Sweidan Jazeara in Deir Ezzor southeastern countryside and led them to unknown destination.

Meanwhile, infighting has erupted among Turkish occupation terrorist mercenaries due to disputes over distributing what they have looted from the citizens’ houses in a number of villages in Ras al-Ayn area, Hasaka northwestern countryside.

Local sources said that disputes took place among terrorist groups affiliated to the so-called “Sultan Murad Faction” terrorist group and” Ahrar al-Sharqia” mercenaries, which led to clashes in the villages of Shallah, Dhiyabia and Rihania in Ras al-Ayn area.

The sources clarified that the clash resulted in a number of injuries among the terrorists and caused material damages to the locals’ houses and their properties.

“QSD” militia continued its criminal and repressive practices against citizens, sabotaging private and public property in areas they are positioned where a group of these militia broke into al-Shuhail water station in Deir –Ezzor countryside which led to sabotaging and it completely.