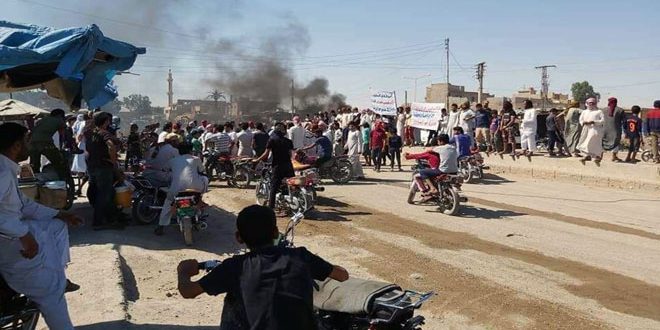 Deir Ezzor, SANA- Locals in Gharanij town in Deir Ezzor eastern countryside staged demonstrations against Qasad groups (SDF) which are backed by the US occupation forces, condemning their arbitrary practices and measures.

Local sources reported that Gharanij town in the eastern countryside of Deir Ezzor  witnessed demonstrations staged by the locals who demanded the release of their sons who have been kidnapped and stopping the arbitrary measures and state of chaos that the town lives in the presence of Qasad (SDF) groups, in addition to the acts of killings and pillaging oil by these groups and the companies that deal with them.

The sources indicated that the demonstrators cut the main roads in Gharanij town and burned tires in it amid the closure of commercial shops.

On June 24th, the locals in Abu Hamam village in al-Bokmal region in the eastern countryside of the province staged demonstrations against Qasad groups (SDF) demanding to expel them from the area and put an end to their practices and confiscation of the locals’ properties, in addition to their acts of pillaging and smuggling the Syrian oil.