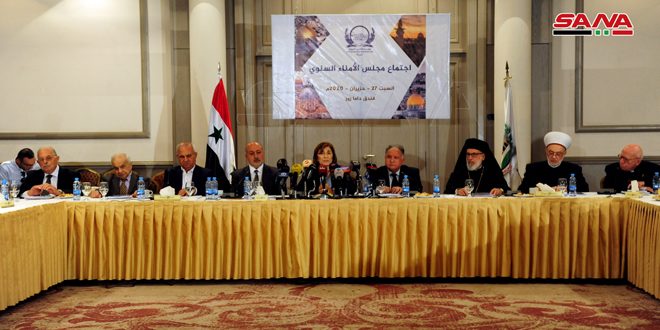 Damascus, SANA_ Presidential Political and Media Advisor Dr. Buthaina Shaaban affirmed that targeting Damascus and al-Quds is one target and the terrorist war on Syria is mainly aims at breaking the will of the resistance of the Syrian people and the allies in the axis of resistance and friends in the axis of combating terrorism.

Shaaban, who is the head of the Board of Trustees of al-Quds International Foundation /Syria/, made these remarks at a press conference on Saturday following the annual meeting of the Board.

She said that it is not a coincidence that economic terrorism against the Syrian people through the so-called” Caesar Act ” coincides with the Zionist annexation plan of the Palestinian territories.

“Syria, which fought for 10 years against atrocious terrorism, continues today the fight against economic terrorism and maintains a firm position of support for Palestine against all the schemes which aim at delivering this region to the usurping Zionist entity, ” Shaaban said.

She stressed that what the United States wants is not a destiny and when the peoples decide to reject humiliation, humiliation and terrorism, they can stand in the face of any power in the world, adding that the Arab people in Syria, Palestine and all parts of the Arab world will not accept what the Zionists plan.

“As terrorism was defeated in Syria, the occupation will be defeated from Palestine and the rest of the occupied lands, whether the occupier was Israeli, Turkish or American and the future will be ours and the truth will prevail at the end,” the Presidential Advisor said.

In a press statement read by the Foundation’s General Manager Khalaf Al-Moftah, the Board of Trustees underlined standing by Syria and its leadership in its war on terrorism and defense of its national sovereignty and resistance to Zio-American plans.

The Board rejected the so-called “Caesar Act” and considering it an aggression against Syrian sovereignty, a violation of international law and a punishment for the Syrian people who fought against terrorism in defense of humanity.