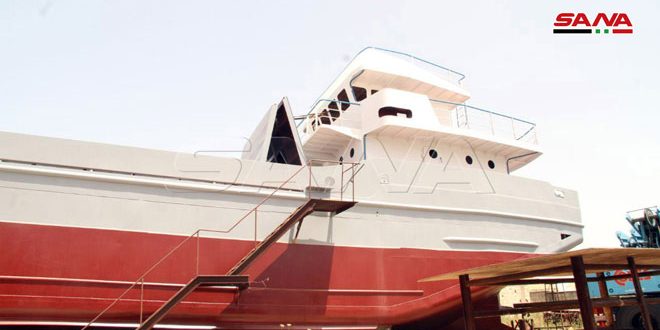 Tartous, SANA_ The Syrian coast has been linked to many traditional industries and crafts, mainly those related to marine industries.

The small ship industry, which is inherited from parents and grandparents, started from Arwad Island to the Syrian sea ports as it is well known for its beauty and accuracy.

A family from Tartous governorate proved the skill and creativity of the Syrians in this industry and wanted its name to be associated with the manufacture of a large ship in Tartous with high skill and technology despite the lack of capabilities.

Hossam Abu Al Nasr, a worker in the field of repairing ship iron for forty years, decided to use his experience and what he learned throughout the years in building a Syrian ship with international specifications.

Husam Abu Al-Nasr with his two sons and about a dozen people who work in his industrial establishment and who have the experience, managed to manufacture a two-storey ship and a special floor in the engine room and driving room, in addition to the compartments for the ship’s crew and a special section for the captain.

Abu Al-Nasr, in a statement to SANA reporter, said that the weight of the ship is 160 tons, its length is more than 28 meters, its width is seven meters, the depth of its diving is three and a half meters and its speed is about 20 nautical miles per hour.

The ship can carry 300 tons per hour, he added, pointing out to the introduction of amendments and additions to the scheme for ships which he sees necessary to distinguish the ship’s work, such as water and diesel tanks.

Abu Al-Nasr, who owns a ship repair and maintenance workshop and holds a license to practice the profession of ship maintenance and repair in addition to shipbuilding, stated that he inherited this ancient profession which has distinguished the Syrian coast for thousands of years from his father and grandparents.

He underlined his keenness to transfer this profession to his children in order to follow the same way of their father and support their expertise by their academic study in the field of shipbuilding and engineering.

Abu Al-Nasr affirmed the ability to build ships with a capacity of up to ten thousand tons in the event of the availability of appropriate conditions, foremost of which is the establishment of dry docks for ship repair and construction in the Syrian Coast region, thus providing great effort and the time it takes to work.

He clarified that the time it takes to build a ship in the event of the availability of appropriate technical conditions do not exceed one year.

The construction of ships was postponed due the conditions of the terrorist war on Syria and the unfair western blockade, which delayed the acquisition of equipment for the command room that is not available in Syria, Abu Al-Nasr said.

Muhammad, one of the sons of Husam Abu Al-Nasr who holds a “Mechanics and electron” certificate pointed to the ability to build ships that are larger than the global ships in the event of the presence of dry basins so that we can prove to the whole world that, despite all the circumstances and crises, the human person and the Syrian mind is capable of creativity and excellence in all fields.