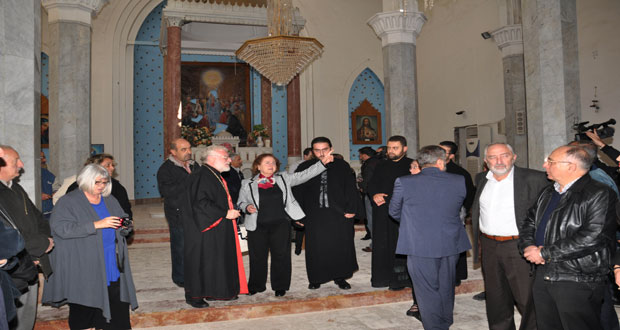 Homs, SANA – A delegation comprising clergymen from a number of U.S. evangelical churches, headed by General Secretary of the National Evangelical Synod of Syria and Lebanon Pastor Fadi Dagher, visited Homs province on Saturday to inspect the reality of events in the province.

The visit included a number of churches in the province, where members of the delegation inspected the huge damage wrought to these monuments by the armed terrorist groups.

Homs Governor Talal al-Barazi, meeting the delegation’s members, stressed that Homs is in the recovery phase thanks to the achievements of the Syrian army in restoring security and stability to most of the province’s areas, adding that rehabilitation and reconstruction work has been carried out to rebuild a number of religious and service buildings.

For his part, Rev Dagher said the visit aims at expressing support to the Syrian people and convey the reality of the events to the U.S. public opinion, wishing that peace and security will be restored to all areas in Syria soon.