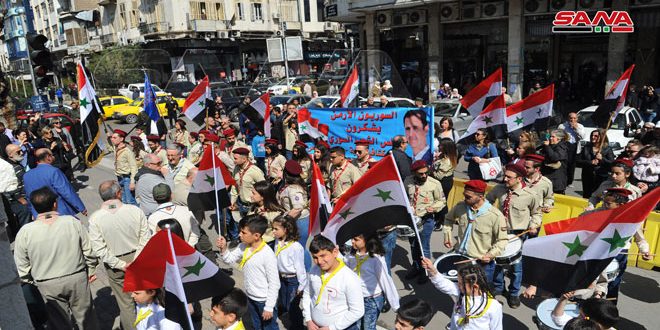 Damascus, SANA_ The Armenian Scouts in Damascus carried out a stand of appreciation towards members of the People’s Assembly for adopting a unanimous resolution recognizing and condemning the genocide committed against the Armenians by the Ottoman Empire at the beginning of the twentieth century.

The scouts performed the Syrian Arab national anthem and scout performances, expressing greetings and appreciation to the members of the Assembly.

During his reception of the members of the scouts who participated in the stand, Speaker of the People’s Assembly Hamouda Sabbagh pointed out to the symbolism and the importance of their stand which coincides with the glorious anniversary of the 8th of March revolution.

He said that our Armenian brothers are an essential part of the Syrian social fabric and efficient members in all aspects of life in Syria including the People’s Assembly, and therefore we salute you on every anniversary and occasion.

Sabbagh affirmed that the People’s Assembly’s decision to recognize and condemn the Armenian genocide came in its correct historical context because this heinous crime is condemned by all standards.

He reiterated that such crimes will stay alive in our memory, therefore the unanimous decision of the People’s Assembly had a special meaning because it is one of the rare decisions that was issued unanimously and not by majority, confirming that whoever does not recognize this genocide is considered a partner in this crime.

In turn, Dean of the fifth regiment of the Armenian Scouts, Mahran Ghazelian, made it clear that the main goal of the stand was to thank members of the People’s Assembly who condemned the Ottoman crime that killed a million and a half Armenians, especially since Syria was the first destination for the survivors of these massacres, so the Armenians still look at Syria with a love, affection, and gratitude for receiving and standing by them.

In a statement to SANA, Head of the Syrian-Armenian Parliamentary Friendship Society in the People’s Assembly, Dr. Nora Eryssian, underlined the importance of this stand, which expresses gratitude and appreciation to members of the People’s Assembly for their unanimous resolution.

In mid-February, the People’s Assembly unanimously adopted a resolution condemning and approving the genocide committed against the Armenians by the Ottoman Empire.