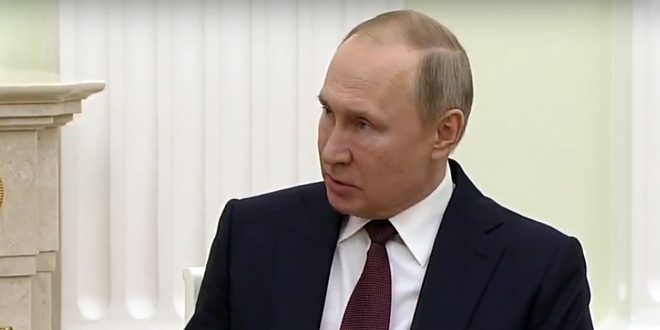 Moscow, SANA- Russian President Vladimir Putin stressed that the situations in Idleb have become very tense, and they entail direct dialogue with the Turkish regime as a part of Sochi agreement regarding the de-escalation zone in Idleb.

Putin said, during his meeting with President of Turkish regime Recep Tayyip Erdogan in Moscow on Thursday, that situation in Idleb had become so tense that it required direct talks between the two men, asserting that it is necessary to discuss the situation resulted today in order not to repeat what happened.

On regard with Turkish soldiers who were killed while they were supporting and ensuring coverage for terrorist organizations in Idleb countryside, Putin pointed out that the Russian and Syrian military personnel were not informed on the position of them.

Russian Presidential Spokesman, Dmitry Peskov said, in a statement on Tuesday, that Russia is committed to Sochi Agreement, and supports Syria’s territorial integrity, as well as supports Syria in continuing its war against terrorist organizations, including those organizations which are enlisted on the UN Security Council list of the terrorist entities.

Russian Defense Ministry underlined that the Turkish regime flagrantly violates Sochi Agreement that has been reached with the Russian side and continues to support and arm terrorist organizations in Idleb.