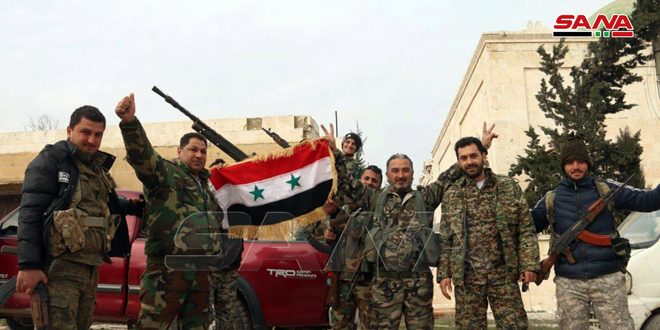 Provinces, SANA- Syrian people expressed condemnation of Erdogan regime’s act of aggression on Syria, his support to terrorism, particularly in Idleb, false pretext to justify his barbaric aggression and use of civilians as a tool to put pressure on the western countries, as well as using terrorists to help him to carry out his schemes.

In facing Erdogan’s aggression, the Syrian people unified their ranks in supporting the Syrian Arab army which spares no efforts in defending the Syrian land and people.

Syrian official and popular figures reiterated their support to the Syrian Arab army in facing the Turkish aggression and support to terrorism till achieving victory and liberating every inch of the Syrian territories.

In Lattakia, Syrian Journalists Union, Lattakia branch told SANA reporter in a statement that Erdogan’s regime was the main supporter for all terrorist organizations since the beginning of the hostile war on Syria.

Locals of the city of Manbij stressed that Turkish soldiers who were killed on the Syrian lands are occupation soldiers, asserting that the Syrian Arab army will not stop its war against terrorism and its supporter till achieving victory and liberating every inch of the Syrian terrorists.

For their part, the locals of Hasaka described the Turkish presence in Syria as “illegitimate” and as “an occupation”, asserting that the Turkish intervention is considered a flagrant occupation which aims at destabilizing the region not only in Syria but also in Iraq, Libya and the Gulf states and reviving the greed of the Neo-Ottomanism.

The locals also appreciated the great victories which the Syrian Arab army has achieved in Aleppo and Idleb provinces, stressing that those victories uncovered the weakness of terrorist organizations.

In Daraa, the locals condemned the blatant interference of the Turkish regime’s forces to support the terrorist organizations in Idleb, asserting that the Syrian Arab army is doing its duty in liberating the Syrian territories from terrorism and their supporters.

In Sweida, the locals underlined Syria’s right to respond to any attack against its land and to eradicate terrorism from its territories which is guaranteed by the international law, UN Charters and UN Security Council’s resolutions, asserting that Syria is a sovereign country and no other country has the right to violate its sovereignty.

aggression condemnation Syrians Turkish 2020-03-01
hala
Share
Previous SANA reporter dismisses news reported by some media outlets that a Syrian warplane was downed and stresses that what has been downed is a drone for the Turkish regime which entered the Syria airspaces
Next   A decree increasing salaries of families of martyrs, the missing and cases of ill health pension by SYP 20 thousand