Syria participates in the 14th plenary session of PAM 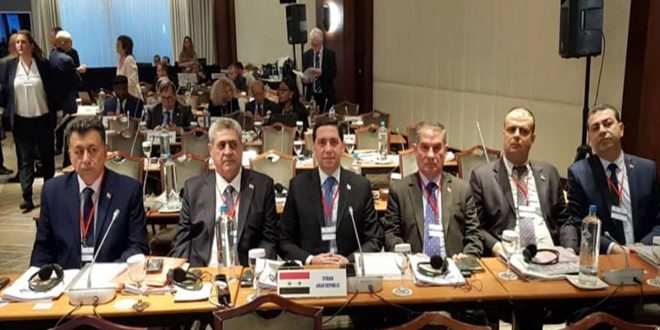 Athens, SANA_ Syria participated in the works of the 14th plenary session of the Parliamentary Assembly of the Mediterranean (PAM) which started on Thursday in Athens, Greece.

Head of the People’s Assembly delegation, Mohammed Ezzat Arabi Katebi, pointed out to the blatant interference of Western and Regional states and their unlimited support for terrorists with weapons and money with the aim of creating the chaos and ruins in Syria and the regional states.

He reiterated that whoever really wants to combat terrorism, must be committed to the UN Security Council’s Resolutions instead of imposing siege and unilateral economic coercive measures to starve the Syrian people who are fighting terrorism on behalf of the whole world .

Arabi Katebi clarified that the international response to the fight against terrorism is inadequate and based on wrong policies, adding that U.S. claims combating terrorism in Syria without coordination or cooperation with the Syrian government and at the same time it protects “Jabhat al-Nusra” terrorists and the Turkish regime’s violations.

He called on the Turkish regime to withdraw its forces from the Syrian territories immediately.

The head of the delegation condemned the crimes committed by the Israeli Occupation against the Palestinian people and our people in the Occupied Syrian Golan.