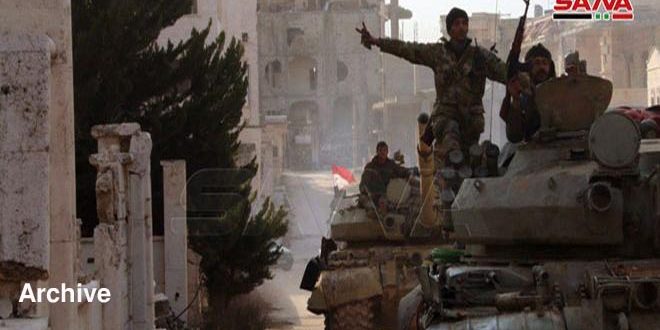 SANA reporter said that the army’s precise operations with intensive artillery and rocket fire on Friday targeted the terrorist groups in the vicinity of Qaminas, Jabal al-Arbeen, the outskirts of Ariha city, Kafar Nubbul and Hass in Idleb countryside and destroyed fortified positions, headquarters and armored vehicles for terrorists.

In the western countryside of Aleppo, the reporter added, the army units carried out heavy strikes with rockets and artillery fire at the terrorists’ fortified positions and their supply lines in the vicinity of al-Atareb and the outskirts of Daret Ezza, inflicting losses upon terrorists in personnel and equipment.

On Thursday, the army units confronted a fierce attack by terrorist organizations from many directions on al-Nayrab town to the west of Saraqeb in Idelb eastern countryside, killing and injuring tens of the terrorists and destroying their armored vehicles. The Turkish regime’s tools of terrorist groups resorted to a media misleading campaign and false news to cover the failure of their attack.

During the past few weeks, army units liberated several villages and towns in the eastern countryside of Idleb after defeating terrorist organizations from them while these organizations, with direct support by the Turkish regime forces, are trying to launch counter-attacks against Syrian Arab Army points, but they fail to achieve their goals or impose any change in the map of control drawn by the army.