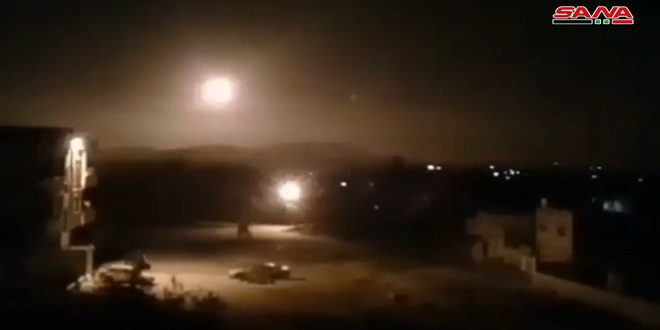 Damascus, SANA_ Syrian air defenses, after midnight, responded to an Israeli missile attack that targeted the vicinity of Damascus and the southern region, shooting down most of the missiles before reaching their targets.

SANA reporter said that the Israeli aggression was carried out on several waves as Israeli enemy aircraft launched several missiles from over the occupied Syrian Golan and southern Lebanon targeting al-Kiswa area, Marj al-Sultan, Baghdad Bridge and South of Izraa.

The reporter added that the air defenses managed to shoot down most of the hostile missiles before reaching their targets.

Photos taken by SANA cameramen showed the moment when the air defenses confronted a number of enemy missiles in the air.