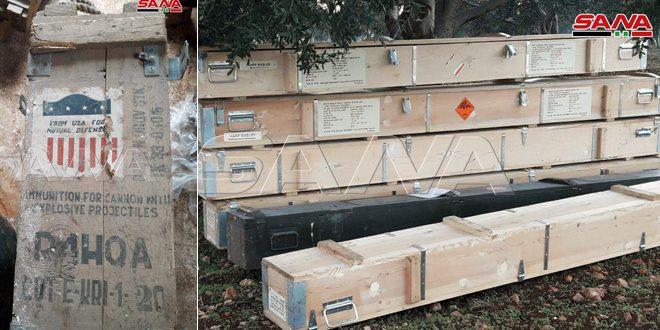 Idleb, SANA-Syrian Arab Army units have found US-made weapons and ammunition, and medicines made in Saudi Arabia and Kuwait at the positions and caches of terrorist organizations in the towns of Mardikh and Kafr Amim in Idleb southeastern countryside after crushing terrorism in them.

SANA reporter said that while combing the areas and towns which have been liberated from terrorism in Idleb southeastern, army units found weapons, ammunition and US-made shells and Grad missiles left behind by terrorists at their positions in the town of Kafr Amim after they fled from the area after the advancement of the army.

The reporter indicated that they also found a field hospital for Jabhat al-Nusra terrorists in Mardikh town that includes medicines and medical materials provided by Saudi Arabia, Kuwait and several other foreign states, in addition to beds and emergency equipment at the positions of the so-called “al-Ababil Battalion” which used to spread in the town of Kafr Amim before they were defeated.