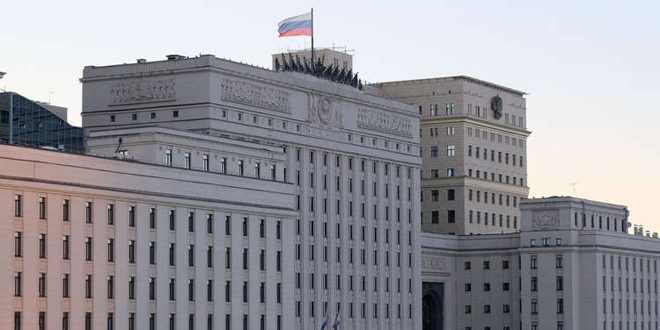 Moscow, SANA_ The Russian Defense Ministry announced that it has information indicating that terrorists of  “White Helmets” and Jabhat al-Nusra are preparing a new provocation in Idleb involving toxic agents to blame Syrian Arab Army of doing that.

“According to information received by the Russian Coordination Center at the Hemeimem base, members of the “White Helmets”, backed by Jabhat al-Nusra terrorists plot a new provocation by using toxic agents in Ma’aret al-Arteeq with participation of around 200 people, who are relatives of the terrorists including children,” the Ministry said in a statement.

According to the Ministry, the information were provided by residents of Ma’aret al-Ateeq town in the area of ​​Mount Samaan in southwestern Aleppo.

The Center noted that terrorists of “White Helmets” delivered 400 liters of chemical substances that were transported in two containers to the scene of filming the provocation in Idleb.

At the end of last month, the Russian Defense Ministry affirmed that terrorist organizations in Idleb have laboratories for preparing and making toxic substances, administrated by experts trained in Europe, to be used for carrying out false-flag chemical attacks on civilians to accuse the Syrian State of the scenario.

Idleb new plot provocation White Helmets 2020-02-04
ghossoun
Share
Previous Mousavi: Syria has the right to liberate all of its territories
Next Temperatures to rise, showers expected in northwestern areas