Mousavi: Syria has the right to liberate all of its territories 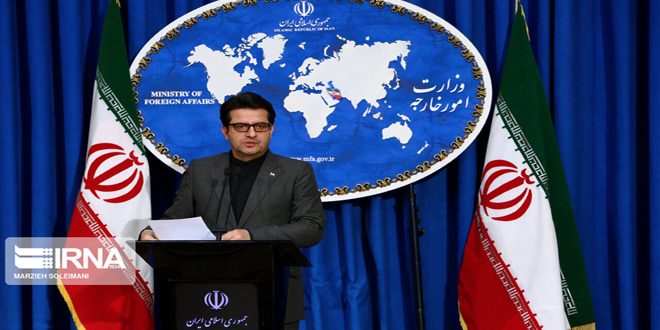 Tehran, SANA- Iranian Foreign Ministry Spokesman Abbas Mousavi affirmed that the Syrian state has the right to clear all of its territories from terrorism, underlining the other states must respect Syria’s decision to maintain its sovereignty and territorial integrity.

Mousavi, in his weekly press conference on Monday commented on the operations launched by the Syrian Arab Amy in Idleb and its outskirts by saying that it is the right of the Syrian state to liberate the rest of its territories from Takfiri terrorism and to maintain its sovereignty and territorial integrity.

He reiterated that the Syrian people are the ones who decide the future of their country, indicating that the political solution is the only settlement for the crisis in Syria and affirming in this regard the importance of Astana track.

Mousavi added that the Iranian presence in some regional states is advisory and it came upon the request of these states.

He noted that his country utilizes all of its capabilities to consolidate security and stability in the region and its policies in this framework depend of building confidence.