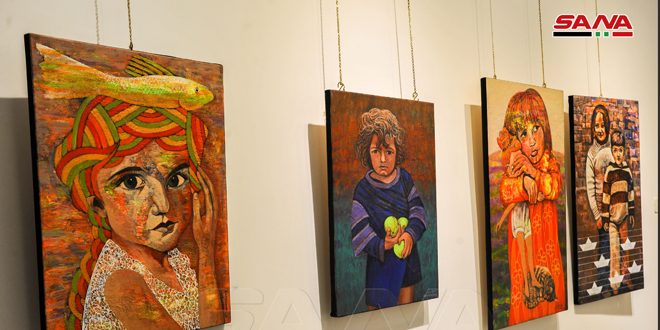 Damascus, SANA_ In his solo exhibition entitled “Qiyama”, artist Nabil al-Samman links the ancient Syrian civilization with its immortal myths, and the present embodying contemporary Syrian man who is capable of creating life, beauty and hope despite pain through a special artistic style characterized by skill and beauty.

The exhibition, which was hosted by Zawaya Gallery, includes 51 works of oil painting technology, with sizes varying between medium and large.

The plastic artist al-Samman said in a statement to SANA that these works were carried out between 2012 and 2019 during the difficult circumstances that our country passed through.  “I chose childhood because of its real symbolism that reflects hope for a prosperous future,” he added.

Al-Samman mentioned that he tried, through his exhibition, to express his vision of the future of Syria, stating that the presence of women in his paintings depict the mothers, wives and daughters of the martyrs and the children in his works are the sons of the martyrs.

The plastic artist Nabil al-Samman was born in Damascus in 1957, graduated from the Faculty of Fine Arts in Damascus, Department of Architecture in 1981. He is a member of the Syrian Plastic Artists Union. Al-Samman organized many solo exhibitions, in addition to his participation in group exhibitions inside and outside Syria. Most of his works are acquired by the Ministry of Culture.