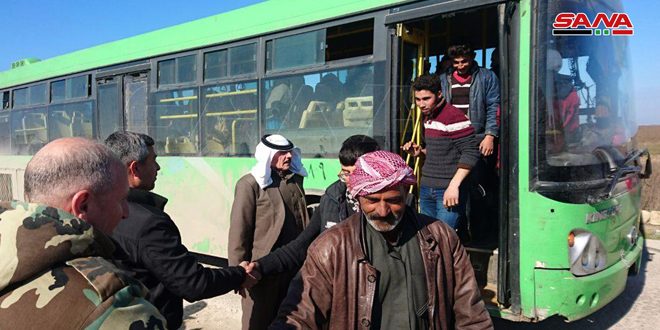 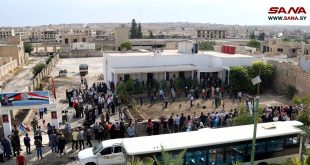 Idleb, Aleppo, SANA- Tens of civilians on Tuesday exited from the areas where terrorist groups spread in the countryside of Aleppo and Idleb through the corridor of al-Hader towards the safe areas which have been liberated from terrorism by the Syrian Arab Army.

SANA’s reporter in Hama said that tens of civilians arrived in Abu al-Dohour corridor, southeast of Idleb coming from the areas where terrorist groups are positioned as the bodies concerned received them, and the medical center provided medical services to the patients, then they were later transported to the liberated areas.

Meanwhile, SANA’s reporter in southern Aleppo said that for the second day in a row, civilians continued to arrive in al-Hader corridor coming from the areas where terrorist groups are positioned in the countryside of Aleppo and Idleb as the bodies concerned received tens of them and provided buses to transport them to the safe areas.

In a desperate attempt by terrorists to sow fear among civilians, terrorists fired mortar shells on the surroundings of al-Hader corridor to prevent them from reaching the corridor and to continue to use them as human shields.