For the first time in Syria, transplantation of skull bone by 3D printing technology 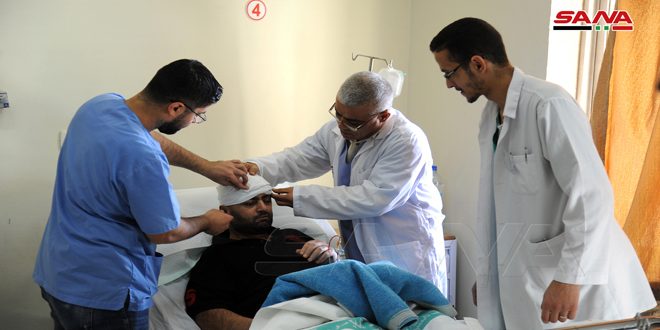 Damascus, SANA_ For the first time in its history, Syria has undergone a unique medical operation using 3D printing technology.

A medical team at Ibn al-Nafis Hospital in Damascus managed to perform a successful operation at the head of a Syrian citizen, where an artificial bone was implanted to compensate for the shortage in his skull, which is about 40%.

In a statement to SANA, Head of the Neurosurgery Department at the hospital, Issa Awad, who performed the operation which lasted for three hours, explained that the process of compensation for the missing skull bone is usually done by restoring the bone itself if possible or through a manual manufacturing of the missing called “bone cement” or a metal mesh connecting the remaining part.

Dr. Awad added that the modern technology used in this operation for the first time in Syria and also at the Arab level is a computerized manufacturing and 3D printer for the missing part of the skull bone, which is about 40%.

He clarified that the difficulty of this kind of surgery is the moment of dissection because there is no tampon carrier for the patient and this is the element that puts pressure on surgeons in general.

According to Awad what distinguishes this printing is that it gives 100% symmetry, it is for the body an acceptable element and more than excellent as a material to interact with the body.”

He explained that the materials from which the missing part was manufactured are made of polyether ether ketone, which does not form any negative interaction with the patient’s body and adheres completely with the bone after about six months.

Several days after surgery, the patient felt much better, especially as the brain became well protected, and the patient appeared talking and moving normally.

The Department of Neurosurgery at Ibn al-Nafis Hospital performs more than 25 surgical operations per month, in addition to a series of emergency operations.

3D printing technology, which was first used in Germany in 2005, has outstanding results, especially in war injuries and accidents

The three-dimensional printing technology has recently entered in all industrial fields, especially in the medical field, especially in the printing of cartilage of joints, arteries and blood vessels, and has a major role in compensating the bone deficiency caused by severe injuries or birth defects, in addition to a lot of new and diverse uses in the medical and industrial generally.