Sabbagh: Syria rejects any conclusion to be issued by fact-finding mission 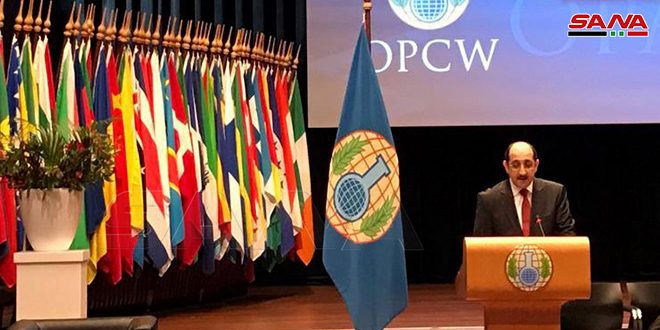 The Hague, SANA_ Syria’s Permanent Representative to the Organization for the Prohibition of Chemical Weapons (OPCW) Bassam Sabbagh affirmed that Syria rejects any conclusion to be issued by fact-finding mission whose creation has constituted an unprecedented incident by commissioning a technical organization with matters that are within the competence of the UN Security Council.

Sabbagh, in Syria’s statement to the 24th conference of the States Parties to the Chemical Weapons Convention in the Huge on Tuesday, announced that Syria , which acceded to the Convention in 2013 , has fulfilled all its obligations resulting from this accession and has accomplished the destruction of its chemical weapons and production facilities under difficult and complex conditions.

“Syria has fulfilled its obligations arising from its accession to the Convention and renews its keenness to continue constructive cooperation with the Technical Secretariat and its various teams,” he said.

Shabbagh added that Syria supports making the Middle East a zone free of weapons of mass destruction and this will not be achieved without obliging “Israel” to join the Convention.

He renewed Syria’s calls for confronting the expansion of the chemical terrorist threats and taking a decisive stance towards countries that cover terrorist crimes.

The Permanent Representative reiterated Syria’s condemnation of using chemical weapons under any circumstances and rejection of attempts by some countries to charge it for serving their own agendas.

“ With every military achievement in defeating terrorists or advance in the political process, Washington deliberately works on misleading the public opinion with the aim of creating pretexts for launching attacks on Syrian territory,” he said.

The Diplomat said that the fact-finding mission report on Douma adopted the theory of distorting reality and this  is scientifically unacceptable as the leaked e-mail of one of the mission’s inspectors eliminates any credibility of the report.

Sabbagh said that Syria renews its call on the OPCW to send a fact-finding mission to the areas liberated by the army from terrorism to investigate the incidents that previously occurred in these areas.

He emphasized Syria’s call on the Organization to double its efforts to invite countries that have not yet joined the Convention to join as soon as possible for guaranteeing the establishment of an effective global regime against chemical weapons.

Last week, Syria welcomed the convening of a conference on setting a zone free of weapons of mass destruction in the Middle East in implementation of the decision taken by the 73rd session of United Nations General Assembly and hopes that it will represent a step in the right direction. Sabbagh concluded.

2019-11-26
ghossoun
Share
Previous Turkish regime’s delegation obstructs Meetings of Committee of Discussing Constitution due to its refusal of agenda
Next Syria, Iran ink executive program on joint cooperation in public services and housing