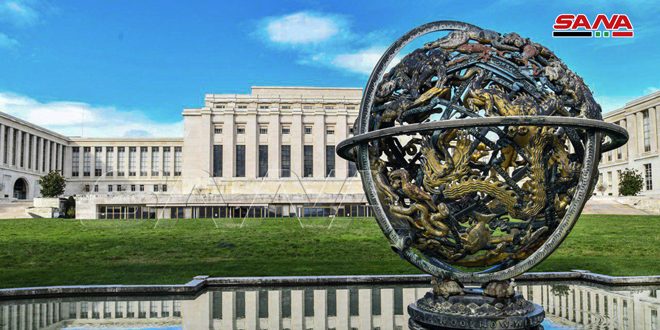 Geneva, SANA_ A source close to the national delegation confirmed that the Turkish regime’s delegation insists to pass certain agendas.

“The Turkish regime’s delegation rejects the agenda proposed by the national delegation in a clear violation of the Code of Conduct which was agreed upon at the first round,” the source said, adding that today it refused to come to the UN HQ to discuss the agenda.

The source said that intransigence and disruption is the precise description of what the other party has been doing since it came, they are holding media talks instead of accepting an agenda for the current session and starting the discussion of what interests the Syrian people.

The other delegation claim that they agree with the national constants but refused to take a stand against terrorism while the national team wants to hold serious and logical discussions starting from what concerns the Syrian people, according to the source.

The source said that the delegation of the Turkish regime wants to pass, through the committee, what is dictated by some countries and regimes that do not want the good of the Syrian people and occupy their land, pointing out that the ideas they put forward undermine the sovereignty and independence of the Syrian Arab Republic, and this is not accepted by the national team at all.

The source concluded by saying that refusal of the national principles that express the conscience of the Syrian people confirms the Turkish regime’s group continued pursuit of policies that serve hostile countries.

close delegation National regime Source Turkish 2019-11-26
ghossoun
Share
Previous Sources close to meetings of Committee of Discussing the Constitution: In a breach of the Code of Conduct which was agreed on at the first round, Turkish regime’s delegation still rejects to come to UN HQ to discuss the agenda.
Next Turkish regime’s delegation obstructs Meetings of Committee of Discussing Constitution due to its refusal of agenda