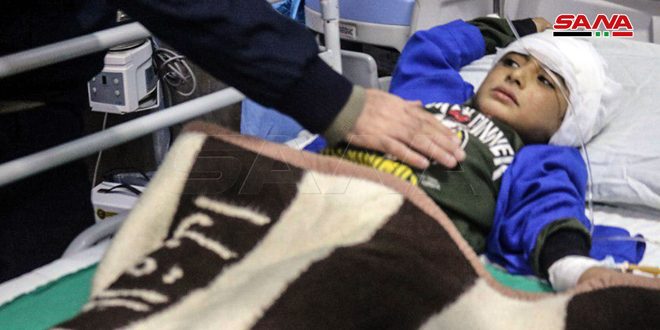 Deir Ezzor/Hama, SANA- A girl child was martyred, 17 others children were injured in landmine blast left behind by Daesh (ISIS) terrorists in a school garden at al- Taybeh village in the eastern countryside of Deir Ezzor.

Assistant Director of al-Assad Hospital in Deir Ezzor, Dr. Issam al-Arfi told SANA reporter that hospitals in Deir Ezzor received a body of a girl child and 17 others children with varying injuries, two of them were in critical condition as a result of an explosion of a landmine left behind by Daesh terrorists in a school garden in al- Taybeh village.

Later, SANA’s reporter in Hama said a farmer was martyred when a landmine left behind by terrorists exploded while the farmer was tilling his land in Tal Bazzam north of Souran town in Hama’s northern countryside.