Al-Kuzbari: Our delegation tried to create common ground based on national constants 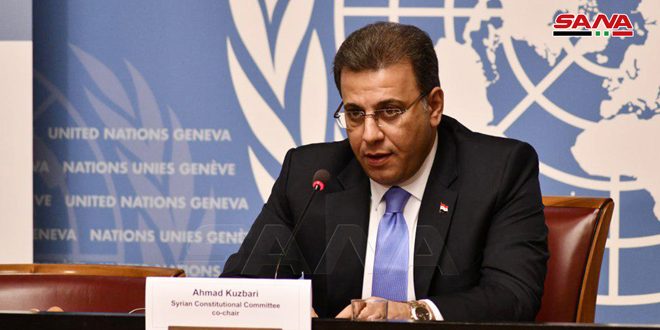 Geneva, SANA _ Head of the delegation supported by the Syrian Government to the Committee of Discussing the Constitution Dr. Ahmad al-Kuzbari stressed that the committee’s work focuses on discussing constitutional reform that may be amending some articles of the current constitution.

Al-Kuzbari said, during a press conference in Geneva on Friday at the end of the meetings of the mini-committee, that the delegation tried, since the beginning of the meetings, to create a common ground with other parties built on national constants accepted by all Syrians which are Syria’s sovereignty, independence, territorial integrity and the continued fight against terrorism.

He added that the delegation believes that every Syrian refuses occupying any part of Syrian territories and controlling their resources, emphasizing that all Syrians call for lifting unilateral coercive economic measures imposed on the Syrian people in various aspects of their life.

Head of the delegation said that the consensus among all parties on key issues provides common ground for real progress in the work of the committee.

Al-Kuzbari added that the delegation, since the beginning of the Committee’s work, submitted a proposal for an agenda that was agreed upon and approved by all parties on sorting ideas that have been inserted by members of the expanded committee into constitutional, legal and political ideas.

He affirmed that another paper was presented on the necessity of condemning all terrorist acts and extremist terrorist ideology and the work on the principle of combating terrorism in the upcoming constitutional reform project.

Al-Kuzbari pointed out to the great consensus on the issue of fighting terrorism. “There is also an international consensus, therefore, it could be developed as an idea and formulated as an article in the Constitution.”

Al-Kuzbari explained that the work of the committee is part of the political solution to the crisis and the acceptance or rejection of terrorism issue by other parties will not dissuade the delegation from continuing to raise this key issue for the Syrian people, who have been suffering terrorism for nine years, considering this issue as one of confidence-building factors.

“ How to preserve the sovereignty under the coercive measures, presence of the Turkish occupation, and presence of an occupation that loots the resources of our country,” he wondered, stressing that there is a basis that must be agreed upon which is the sovereignty and territorial integrity of the Syrian Arab Republic and the independence of its decision, not only as a line or article in the constitution, but it must be translated into a reality agreed upon by all parties.

Al-Kuzbari asserted the need for all members of the committee to realize that we did not come to Geneva to build a new state because the Syrian Arab Republic is an existing state and has its constitution, parliament, government, army, and institutions. “ We came here for constitutional reform and  this reform may be by amending some articles of the current constitution which will remain in force until the last moment in which the Syrian people decide to draft a new constitution.”

“ We are open to the drafting of a new constitution, so long as it achieves all the objectives of the Syrian state and remains committed to the national constants, and most importantly, to obtain the approval of the Syrian people.” He said.

Al-Kuzbari concluded by saying that the delegation, supported by the Syrian Government, is a legal and technical delegation and not a political one.