Syria, Russia call upon international community to pressurize Washington to pull its forces out of Syria 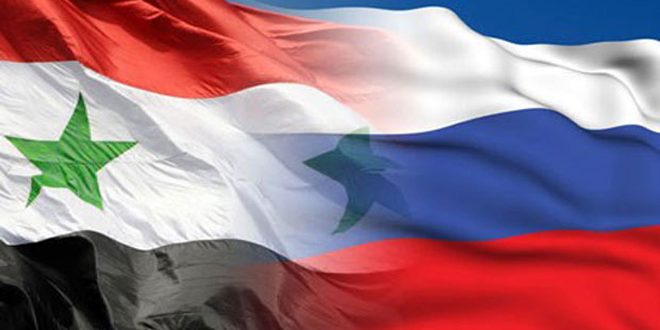 Moscow, SANA–  Syria and Russia have renewed their call upon the international community to exercise pressure on the U.S. to oblige it to completely pull out its occupational forces from Syria.

In a joint statement issued Thursday by the Syrian and Russian coordination committees on the return of displaced Syrians, said that Syria and Russia urge the whole international community to exercise pressure on the U. S. which continues to violate the international law through its illegal presence in the Syrian territories, and to oblige it to completely withdraw its forces form the sovereign Syrian Arab Republic.

In a relevant context, the statement indicated that the U.S. rejects offering any security guarantees to the UN mission which is participating in transporting the displaced people who are detained at al-Rukban Camp in a way that hinders the process of dismantling the camp and ending the tragedy of thousands of families there and their return to their areas which have been liberated from terrorism.

The two committees have frequently called on the U.S. side to immediately leave the Syrian lands which it occupies, asserting that the U.S. have foiled the plan of evacuating civilians from al-Rukban camp as it doesn’t implement its obligations in this regard through using the camp as a human shield to continue its occupation of al-Tanf area.