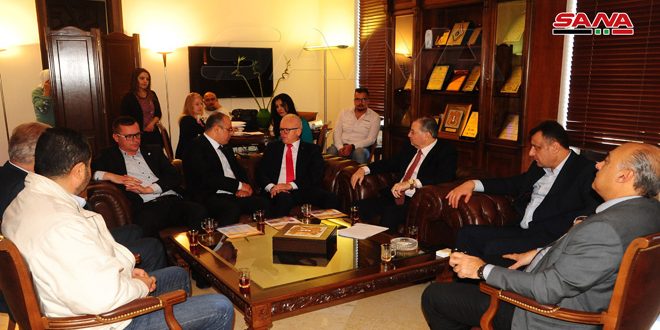 Damascus, SANA- Rector of Damascus University, Mohammad Maher Qabaqibi discussed with Rector of the Economic University of Bratislava in Slovakia Ferdinand Dano means of developing scientific and academic cooperation between the two sides according to the common specialities and needs.

During their meeting on Wednesday, the two sides agreed on activating the previous scientific agreements and preparing for signing a new agreement in the economic, marketing and electronic trade and administration fields.
They also discussed means of exchanging students and academics, and conducting joint scientific research to serve the interests of the two sides.

In turn, Prof. Dano underlined the importance of developing the scientific research and benefiting from the Syrian academic expertise in this domain.

He also expressed his university’s readiness to develop its relations with Damascus University and other Syrian universities.

Meanwhile, Dr. Qabaqibi discussed with Kairat Lama Sharif, Ambassador-at-Large of the Ministry of Foreign Affairs of the Republic of Kazakhstan and the accompanying delegation, ways of developing bilateral relations in the scientific and cultural domains.

The two sides also touched upon the underway preparations for the cultural festivity scheduled to be held at Damascus University next January on occasion of the 1150th anniversary of the birth of Scientist Abu Nasr al-Farabi and the opening of al-Farabi Cultural center next to the shrine of al-Farabi in Damascus Old City.

The two sides also signed the memo of understanding which was agreed upon by Damascus University and the Kazakh al-Farabi University last September with the aim of enhancing cooperation in the students and academics exchange.

2019-11-07
ruaa-jazaeri
Share
Previous Syria, Russia call upon international community to pressurize Washington to pull its forces out of Syria
Next Iran renews support to Syria’s sovereignty and territorial integrity