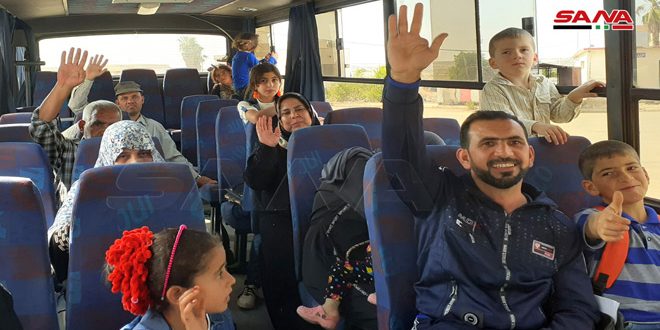 Daraa, SANA_ A group of displaced Syrians returned home on Wednesday through  Nassib border crossing with Jordan after their towns and villages were cleaned from the foreign-backed terrorism.

SANA reporter said that that the concerned parties have received the returnees and achieved all procedures related to completing personal data and permanent residence addresses to be transferred to their areas and cities which have been liberated from terrorism by the Syrian Arab Army .

Head of Immigration and Passports Department at Nassib border crossing Mazen Ghandour, told reporters that the concerned authorities have provided the necessary services for transporting the returnees with their children to the nearest point through which they can arrive to their places of residence.

He said that the number of returnees, since the opening of the crossing  until now, reached 29549  persons.

Anas Salloum, the returnee to al-Insha’at district in Homs province, said that ” returning to the homeland constitutes a new page in his life which will be filled with work and perseverance to rebuild what was destroyed by terrorism.

Athar al-Omari, the returnee to Sheikh Miskin in Daraa countryside, described her return as “the new life after bitter years of displacement in al-Azraq camp in Jordan.”

Ibrahim Kharoub, from Jassem in Daraa countryside, hailed the reception and facilitations provided to the returnees in the border crossing.

For her part, Asia al-Zoobi, from Sahem al-Golan,  hoped that the country would return as it was about nine years ago as this thing was emphasized by Khudr al-Zoobi who expressed his thanks and appreciation for the Syrian Arab Army personnel who returned security and stability.

Since its opening in October 2018, after the liberation of the southern region from terrorism, Nassib-Jaber border crossing has been witnessing a steady return of displaced Syrians from refugee camps in Jordan to their liberated cities and towns in parallel with the efforts being exerted by concerned authorities to restore normal life to them. 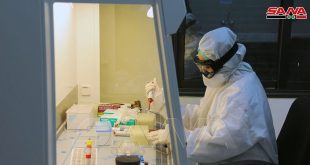 Damascus, SANA –A new increase in number of registered Coronavirus cases confirmed by PCR, where …