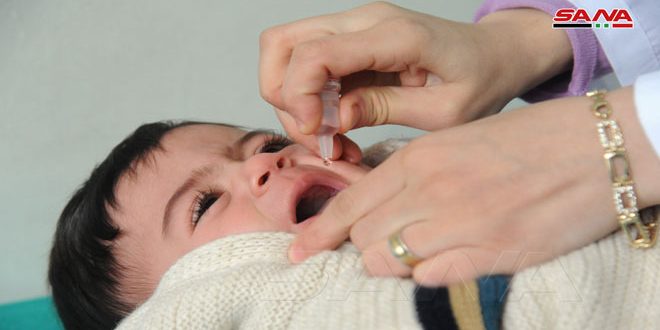 Damascus, SANA_ The second anti-polio vaccination campaign for the current  year will be launched Sunday by the Ministry of Health.

The one-week long national campaign targets children under five regardless of their previous vaccines.

Director of Primary Health Care Department at Health Ministry Dr. Fadi Kassis  told SANA reporter that the Ministry had taken all the technical and logistic preparations to guarantee that the campaign will reach 2.774 million children in all areas through 9000 health workers deployed on  967  health centers in addition to 2300 mobile teams.

He added that the vaccine used in the campaign is safe and effective and will be given free of charge.

The first national anti-polio vaccination campaign was carried out last March, according to Kassis, reaching 91 percent of the targeted children.

For his part, representative of the World Health Organization in Syria, Dr. Ne’me Said, pointed out to the importance of continuing anti-polio vaccination campaigns to ensure that Syria is free of  the disease, especially in the most dangerous places.

He praised the ministry’s achievements in controlling the polio epidemic twice in a record time in 2013 and 2017 to declare Syria free of polio due to Health Ministry’s efforts and the media role in educating people about the importance of the vaccine to preserve the child’s health.

At the end of 2018, World Health Organization announced that Syria is free of polio.

Syria was announced polio-free in 1995, and no cases had been detected until 2013, the year in which the disease returned to the country as several cases were reported by wild poliovirus imported from Pakistan through the armed terrorist groups.

Consequently, the Ministry of Health launched a series of vaccination campaigns and succeeded to stop the virus from spreading by the beginning of 2014, where no cases were detected. The disease returned again in 2017 after several cases were detected in Deir Ezzor. National vaccination campaigns have continued since then and reached 29 ones today.