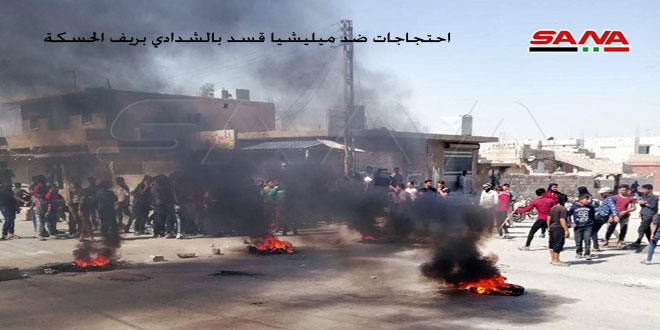 Deir Ezzor/Hasaka, SANA- The US-backed Qasad militias raided a number of houses in Deir Ezzor, abducting a number of youths and seizing their properties.

Local sources told SANA that Qasad militias, under US air support, stormed into houses in al-Hajim neighborhood in Ziban town at Deir Ezzor southeastern countryside, and kidnapped a civilian.

The Qasad militias also abducted three women at a roadblock east of Raqqa city, and seized a number of motorcycles at its roadblocks across Hasaka city.

The body of woman killed by unknown persons was found in al-Houl Camp which is controlled by Qasad militias in the southeastern countryside of Hasaka, the sources said , adding that another woman who had been injured died as a result of severe bloodless at a roadblock after members of Qasad militias prevented her from entering Raqqa city for treatment.

In Hasaka countryside, local sources said that drinking water was cut off from Ras al-Ain city in Hasaka northwestern countryside due to the tunneling operations carried out by Qasad inside the city’s neighborhoods.