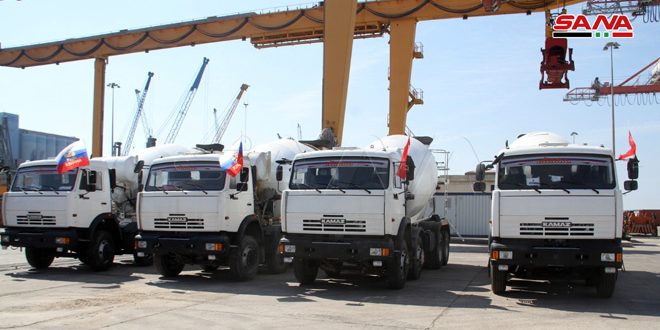 The first batch of equipment, received by the ministry at Tartous Port, is part of the memo of understanding inked in 2018 between both sides on cooperation in field of public construction and the implementation of housing projects.

Deputy Minister of Public Works and Housing Mohammad Saif Eddin told reporters that this batch of equipment is part of the agreement inked with the Russian company to import 144 vehicles to be received within a year from the date of inking the memo.

He underlined the need of Syrian companies for these equipment to participate in reconstruction.

The received equipment are to compensate for the machines damaged during the terrorist war on Syria, said Eng. Mohammad Assi, Head of the General Company for Roads and Bridges

Director General of the Russian Company Denis Matuz explained that the fruitful cooperation between the company and the Ministry of Public Works and Housing came to crown the continuous work and effort and in implementation of the cooperation protocols and joint Russian-Syrian meetings for trade, economic, technical and scientific cooperation.

He indicated that the Russian company has signed a memorandum of understanding with the General Establishment for Housing in Syria for the implementation of housing projects, including the construction of  island 21 in ad-Dimas region in Damascus Countryside.