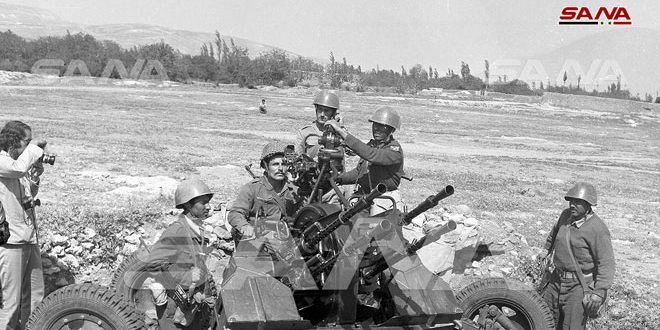 Damascus, SANA_  Forty-six years have elapsed since Syria’s victory over the Zionist entity in October Liberation War. The memories of 1973 war will ever remain vivid in the minds as the Arab soldiers shattered the legend of the invincible Israeli army.

Since the October Liberation War led by the great late leader Hafez al–Assad, heroes of  Syrian Arab army, who had achieved victory over the Israeli enemy in 1973, continue their victories defeating the terrorist organizations, their sponsors and their financiers and today they are more determined to eradicate terrorism phenomena from all the Syrian territories.

Nowadays, the Syrian people are living the joy of victory over large-scale terrorist war waged on their country with the aim of undermining its strength, unity and steadfastness. A victory that would not have been possible without the heroism and bravery of the Syrian army and the great sacrifices of its members to restore security and stability to every part of their beloved homeland

For several years, the Syrian army has confronted western-US-Zionist schemes to fragment the region and defeated their agents of takfiri mercenaries despite the massive intelligence and logistics support provided for them.

The significant triumph in October Liberation War made a real change in the desperate Arab situation after the Naksa of June, revived hope and paved the way for a series of victories.

The successive victories of the Syrian Arab army in its war against terrorism and its backers, constitute a steady pace on the road to the restoration of the occupied Syrian Golan.