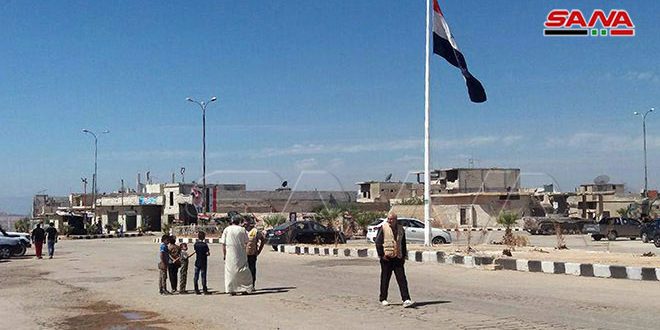 Idleb, SANA- After eradicating terrorism from it recently by the Syrian Arab Army, Khan Sheikhoun City in Idleb southern countryside is currently witnessing the return of its locals to their homes after being displaced for years at the hands of terrorist organizations which practiced all forms of destruction and killing against them.

“After several years of leaving our city due to the attacks launched by the terrorist organizations, today we have returned to practice our normal life and we are overwhelmed with hope to rehabilitate what have been destroyed at the hands of terrorists as workshops of the service institutions are rehabilitating the service facilities,” Mohammad Knaisawi, one of the returnees, told SANA’s reporter.

Hussein Haj Ali, one of the locals who returned to the city, says that the return of hundreds of families to Khan Sheikhoun “has contributed to pushing the wheel of life forwards and starting the reconstruction process in the city.”

He indicated that “rehabilitation of a number of artesian wells is underway to put them into service soon and feed the city with drinking water.”

Tareq Suleiman, Ruaa al-Sheikh Ali and Gorge Ibrahim, volunteers at the Syrian Society for Social Development in Massyaf pointed out that the society has effectively participated in restoring the normal life to the city through its voluntary teams since the first days of liberating the city and expelling terrorists from it through providing the basic services for the returnees and it has worked on supporting the sustainable livelihood for the families.

They added that the society helps the returning families to launch their projects and it provides job opportunities for the returnees based on the local resources and products.

On Aug. 23rd, Army and Armed Forces General Command declared liberating Khan Sheikhoun City in Idleb southern countryside and a number of villages and towns in Hama northern countryside from terrorism after inflicting heavy losses on them in the personnel and equipment.