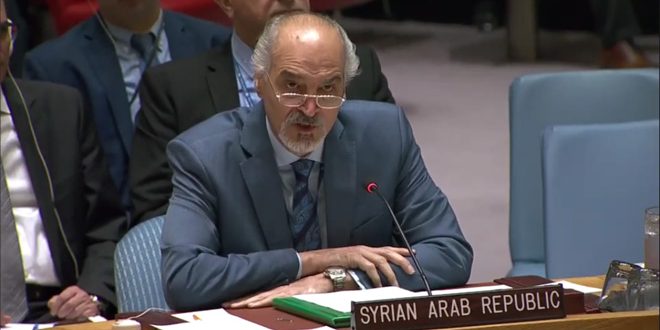 New York, SANA – Syria’s Permanent Representative to the UN, Dr. Bashar al-Jaafari, said that governments of some permanent members at UNSC continue to misuse UN mechanisms to politicize the humanitarian situation in Syria by using this situation as a tool in a hostile campaign which aims to destabilize Syria’s safety and stability and support terrorism.

Al-Jaafari, speaking at a security Council session on the situation in Syria Thursday , said that improving the humanitarian situation in Syria and confronting difficulties  faced by Syrians require  full commitment the respect for Syria’s sovereignty and territorial integrity and to support the efforts of the government and its allies in combating the remaining terrorist organizations.

He called for ending  the illegitimate presence of foreign troops on the Syrian territory , and halting the war crimes committed by illegal US-led coalition.

Al-Jaafari demanded for the immediate lifting of the unilateral coercive measures which have severely affected the lives of Syrians and hindered getting their daily and basic needs.

The Syrian diplomat stressed that Syria agreed to apply a cease-fire in the de-escalation zone of Idleb as of August 31st with keeping the right of response to any breach by terrorists, adding that Syria, in cooperation with the Russian side, opened a second humanitarian corridor at Abu al-Douhor area in Idleb.

He went on to say that terrorist organizations in Idleb continue to take civilians as human shields , and prevent them, for the seventh day, from leaving towards areas liberated by the Syrian Arab Army via Abu al-Duhour corridor.

Al-Jaafari added that the Syrian-Russian coordination has enabled more than 29 thousand civilians to come out of al-Rukban camp and residing them at temporary shelters in a step to return them to their areas liberated by the Syrian Army.

He affirmed that US-backed terrorist groups prevent residents at al-Rukban Camp from leaving it , forcibly seizing large amounts of humanitarian aid and transport it to their positions in al-Tanf area.

Al-Jaafari added that Syria is going ahead in cooperation with partners in the humanitarian action and exerts huge efforts in this regard. 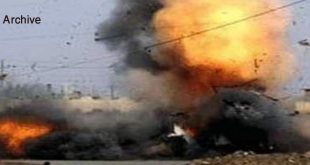 Aleppo, SANA –Two mercenaries of Turkish occupation were killed in explosion in the vicinity of …