Ala: Syrian Army determined to eliminate terrorist hotbeds across the country 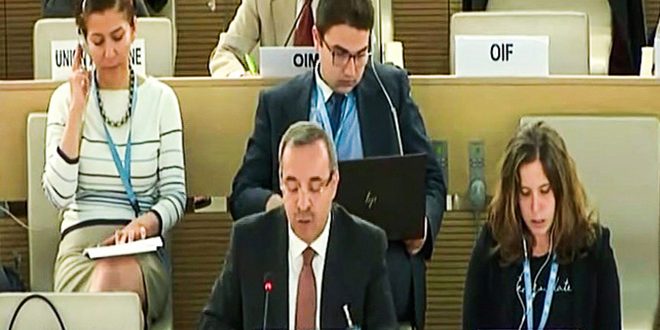 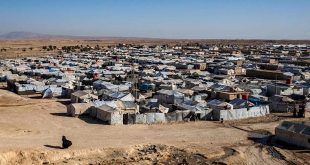 Geneva, SANA- Syria’s Representative to the UN and other international organizations in Geneva Ambassador Hussam Eddin Ala stressed on Tuesday that the Syrian Arab Army is determined to eliminate terrorist hotbeds across the country, and that the reports of the international committee are fully of contradictions and distort facts in Syria.

During a Human Rights Council session in Geneva, Ala said that taking things out of context and ignoring the main reasons for humanitarian suffering in Syria, mainly terrorism, sanctions, and foreign attacks and occupation, doesn’t provide a realistic picture of the situation in the country.

He said the international committee’s reports continue to distort facts in Syria and to adopt double standards and a selective approach, with the most recent report of the committee being full of falsehoods, contradictions, and accusations based on biased sources.

Ala noted that the report, while acknowledging the US airstrikes that destroyed entire towns and villages, refrains from describing them as war crimes, and instead seeks to find excuses for them, and it also tries to promote the US, Turkish, and Israeli narratives to justify their transgressions on Syria, as well as promoting working with separatist militias.

He said that the Syrian state has taken all necessary procedures to protect its citizens in Idleb and to help them, as it has opened two humanitarian  corridors and thousands of citizens have passed through Souran corridor and they returned back to their villages and towns in Hama and Idleb countryside over the past few days.

Ala said talk of stopping operations in the de-escalation zone in Idleb where terrorists affiliated to Al Qaida are present is an attempt to dissuade Syria from fighting terrorism and to protect the terrorists there which attack nearby areas.

He added that the Turkish regime continues to evade its responsibilities as per the Sochi agreement, and it still provides the terrorist organizations in Idleb with arms and munitions.

The Ambassador pointed out that the Syrian Arab army is doing its national duty in combating terrorism in Idleb and it is determined to eliminate all terrorists’ hotbeds across the entirety of Syrian territory.

Ala pointed out that contrary to misleading reports, the Syrian state is committed to protecting civilian facilities, including the medical facilities which the terrorist groups have used as bases and positions for launching attacks against neighboring areas.

He noted that the Syrian state enabled around 30,000 people to exit al-Rukban Camp and return to their homes, and work is underway to evacuate the rest, asserting that Syria refutes the false claims of the committee about forced detainment, as UN representatives have visited temporary housing centers and the areas to which the people from the camp have returned to.

Ala indicated that the US troops and the terrorist groups in al-Tanf area are responsible for the humanitarian crisis at al-Rukban Camp.

Ala  affirmed that the Committee’s report avoids acknowledging that the practices and attacks of the US-led international coalition and Qasad (SDF) separatist militias, as war crimes and violations, when these practices include attacks against civilians and civilian infrastructure, destroying homes and killing their inhabitants in Deir Ezzor and Raqqa, using prohibited weapons, terrorizing civilians and forcibly displacing them, and holding people captive in camps where they are deprived of their basic needs and medical care.

He noted that Syria provided access to the UN and other relief organizations to reach al-Houl Camp,  holding the US and its separatist militias pawns responsible for the humanitarian catastrophe which affected  more than 70,000 displaced people at that camp.

The Ambassador said moral obligation requires working to lift the sanctions imposed by the US and the EU on Syria as they violate human rights, as well as working to procure unconditional support for the reconstruction and rehabilitation of areas liberated from terrorism.

He concluded by saying that supporting the efforts of the UN Special Envoy for Syria for facilitating intra-Syrian dialogue requires ending the immoral coercive practices of certain states and ceasing their support to terrorism, as well as ending the illegal foreign presence in Syria, facilitating the return of displaced people without preconditions, and ceasing the propaganda campaigns in which this Council and its reports are participating.