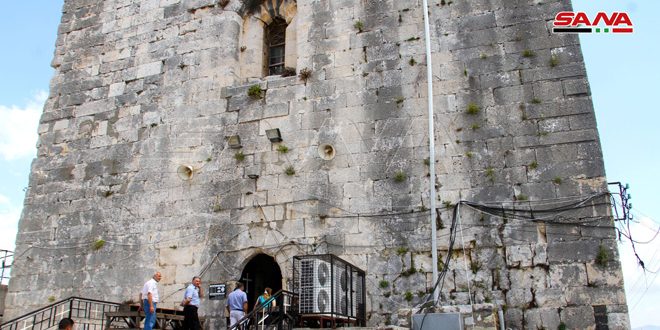 Tartous, SANA- Safita Tower in the middle of Tartous province is 419 meters above sea level.

The tower is the only archeological monument which has been left of Safita citadel and it is 39 meters long and it is considered one of the most important archeological edifices in the city.

The tower can be entered through a gate overlooking the eastern direction and it consists of a two-story building .

The fortified tower consists of four parts which are the Phoenician basis and the land floor includes cellars with semi-circular ceilings that have gates leading to vaults.

The first floor of the tower contains a church while the second floor is called the major hall and it consists of an open hall which have windows and deep arrow goals used for defending the tower .

Meanwhile, the second floor was designed and built in the early the 13th century on three bases of pillars.

Safita tower 2019-09-17
Rasha milhem
Share
Previous Ambassador Ala: International Committee’s reports continue to falsify facts in Syria and to adopt double standards policy, and the committee’s final report is full of falsifications and contradiction.
Next Ala: Syrian Army determined to eliminate terrorist hotbeds across the country