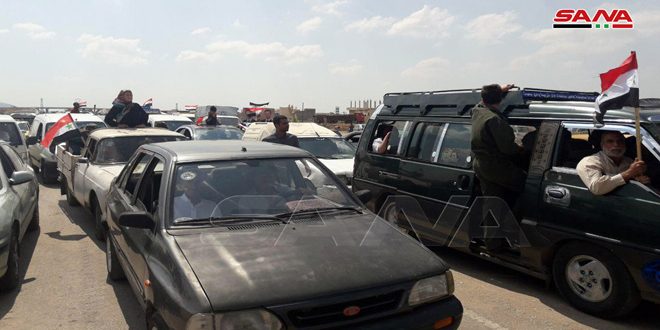 SANA reporter said that thousands of citizens have returned to their villages and towns through Souran corridor.

The return of the displaced came due to the efforts exerted by the Syrian Government for the return of all displaced to their villages and towns.

A number of returnees, speaking to SANA reporter, voiced their happiness to return to their homes after the defeat of terrorist organizations thanks to the army’s sacrifices.

They pointed out that they were sure that the army will come to rid them of terrorism.

Service workshops in Hama province have started to restore basic services to the areas cleared of terrorism by the Syrian Arab Army in the towns and villages of Morek, Kafar Zitta, Latmin, al-Latamineh, al-Sheikh Hadid, Kafrnabbudeh, Karnaz and Lahya.

The terrorist organizations continue, for the second day in a row, to prevent citizens in Idleb province from leaving via Abu al-Duhour corridor in the southeastern countryside of Idleb, by opening fire and threatening to kill those who want to leave.

As part of the State’s efforts to alleviate the suffering of civilians and rid them of the terrorism,  the concerned authorities, in cooperation with the Syrian Arab Army units, opened Saturday Abu al-Duhour corridor and equipped it with all logistical requirements to receive civilians who want to leave terrorist-held areas.