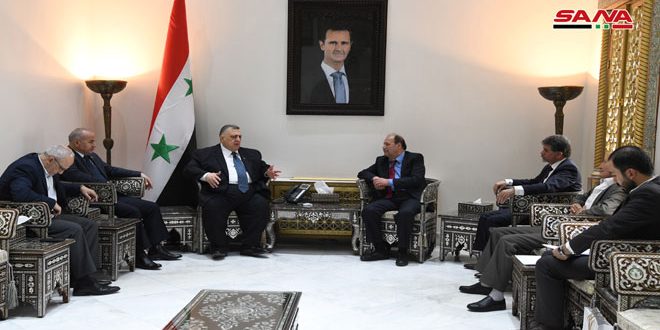 Damascus, SANA- Speaker of the People’s Assembly Hammoudeh Sabbagh affirmed the necessity of coordination with the Parliamentary Assembly of the Mediterranean (PAM)  in the regional and international conferences in various activities that serve the Palestinian cause and the Arab people’s rights.

Meeting Member of the Palestinian National Assembly and PAM vice-President Bilal Kassem in Damascus on Thursday, Sabbagh stressed that the Palestinian cause will remain a priority for Syria, which has surpassed the most difficult stages in its war on terrorism and approached the final victory on it, underlining that no compromise on the rights of the Palestinian people.

For his part, Kassem expressed readiness to cooperate and coordinate in the international meetings to convoy the real image of what Syria has been exposed to due to terrorism and to reject any procedure that affects the Arabism of the occupied Syrian Golan.