Nasrallah: main reason behind terrorist war on Syria was to weaken it 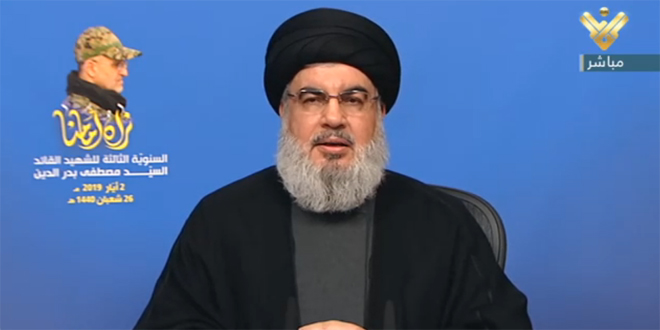 Beirut, SANA-Secretary General of Hezbollah, Sayyed Hassan Nasrallah, said on Thursday that one of the main reasons behind the terrorist war on Syria was to weaken the country in the interests of the Israeli occupation and to strike the resistance axis in the region.

“It is enough for Syria that it didn’t give up, but it has stood and protected the resistance,” Nasrallah said in a speech.

He added that Washington has created Daesh terrorist organization to be a tool against those who face the US and Zionist plots.

Nasrallah said that though Daesh was defeated in Syria and Iraq, it still poses threat to the whole region.