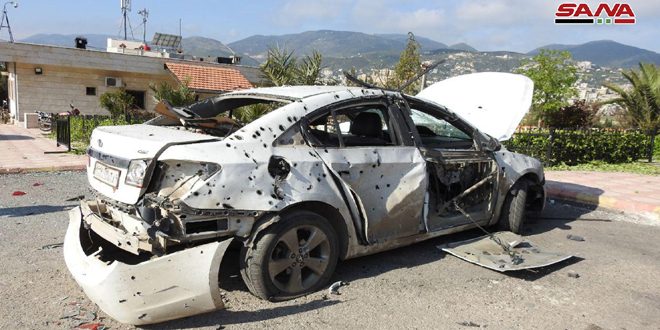 Hama, SANA- The number of martyrs in the terrorist shelling attacks which targeted Massyaf National Hospital rose to 5 while the number of the injured reached up to 15.

Earlier the reporter said that terrorist groups, positioned in the countryside of Hama and Idleb on Sunday morning fired rocket shells on Massyaf City in the western countryside as a number of shells fell on the entrance of Massyaf National Hospital and the Children Department.

The reporter added that 4 civilians were martyred in the terrorist attacks and 14 wounded, some of them are in critical condition, in addition to causing material damage to the building and some parked cars.

Meanwhile, the reporter indicated that an army unit retaliated through targeting the areas from where the shells were fired, inflicting heavy losses on terrorists in the personnel and equipment.

In a statement to SANA, Director of the Hospital’s General Commission Dr. Maher Yunus said that “It isn’t the first time terrorist groups fire rocket shells on the hospital, yet it is the most criminal attack this time as the number of martyrs reached up to 5 including a driver at the emergency system while the number of the injured reached up to 15, including four of the medical and nursing cadres.”

Dr. Bassam Qatrib, in turn, indicated that terrorists attacked the hospital since the early morning with five rocket shells as he sustained moderate injuries with shrapnel in different parts of his body and his health condition is stable now and he receives treatment at the hospital.

For his part, Head of the Nursing Department Ayman Shbib said that he sustained moderate injuries in different parts of his body due to the shrapnel from the rocket shells which targeted the building of the hospital directly.”

He affirmed that the attack will not prevent the cadres working at the hospital from accomplishing their job and humanitarian duty.

On Saturday, a civilians was martyred and material damage was caused to the citizens’ houses and their properties in a terrorist shelling attack in Hama northwestern countryside.