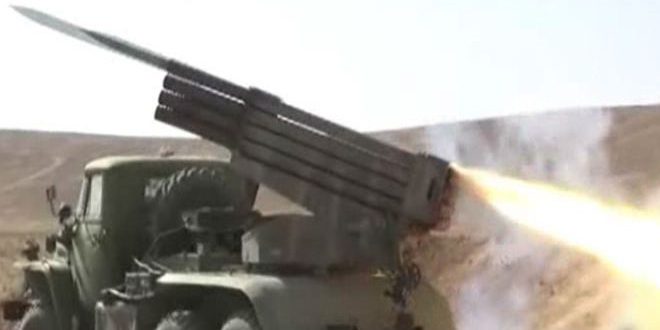 Hama, SANA – The army units responded to the terrorist groups’ continued shelling attacks against civilians in the northern countryside of Hama, targeting their dens and positions and the sources of shelling.

SANA reporter in Hama said army units launched intensive artillery and rocket strikes against dens of terrorists in the surroundings of Latamina and Kafrzita in the northern countryside in response to the terrorists’ targeting of Mharda power generating station.

The strikes left pads for launching shells destroyed and many terrorists dead or wounded.

The reporter added that an army unit targeted movements of terrorist groups on the outskirts of Hisraya and Kafrzita towns, leaving a number of terrorists dead.

Another army unit launched artillery strikes on the infiltration axes of the terrorist groups from Latamina, 35 km north of Hama city, towards safe areas and military posts deployed in the northern countryside of the province.

The strikes foiled the terrorists’ infiltration attempts, killing and injuring many of them, while the rest fled away.