The army carries out operations against terrorists in Hama countryside, foils infiltration attempt 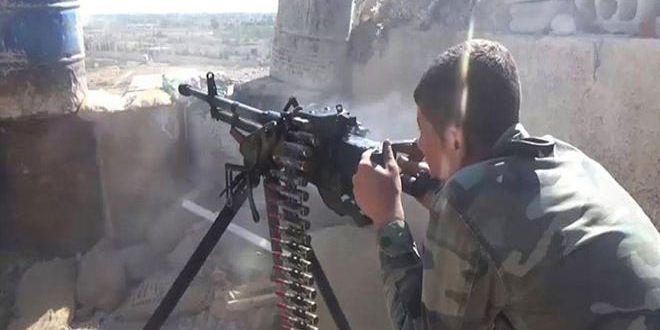 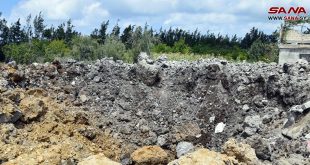 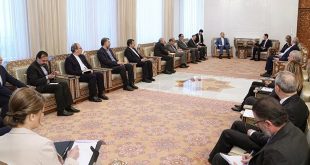 Hama, SANA- Units of the Syrian Arab army carried out on Saturday military operations against dens of terrorist groups in the surroundings of  Abu Ra’eda village in Hama northern countryside in response to their breaches of de-escalation zone agreement, SANA reporter said.

Meanwhile, units of the army foiled an infiltration attempt by terrorists near the agriculture airport in al-Sharia village in Hama northern countryside, killing and injuring a number of the terrorists.

The reporter added that another army unit foiled an attempt by terrorist groups to infiltrate from the axis of Ma’arkaba into the military points in the region, inflicting them heavy losses.

Meanwhile, SANA’ s reporter said that army units tracked movements of terrorist groups in al-Khawin, Skeik, al-Zarzour and al-Taman’a in Idleb southern countryside and targeted them with machineguns and artillery.

The reporter pointed out that army units retaliated to the Jabhat al-Nusra and the so-called “al-Ezza Battalion” terrorists’ breaches in the lines of Wadi al-Dawrat to the east of al-Latamina, al-Bowida, al-Lahaya and Moarkaba in the northern countryside of Hama, destroying their gatherings and fortifications.

2019-01-26
m.eyon
Share
Previous Syrian inventor designs electric wheelchair controlled by head motion
Next Foreign Ministry: Activating Adana Agreement can be done when situation in the borders returns the way it used to be and when Turkish regime stops supporting terrorism and its forces withdraw