Lavrov: Presence of US troops in Syria illegal, withdrawal step in right direction 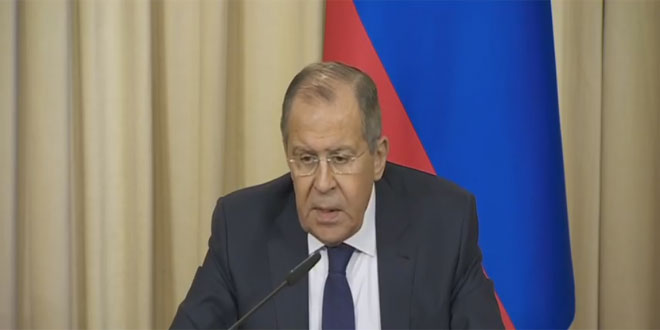 Moscow, SANA_  Russian Foreign Minister Sergey Lavrov on Friday renewed that the presence of US troops in Syria is illegal, considering  the announcement of their withdrawal is a step in the right direction.

During a joint press conference with his Palestinian counterpart Riyad al-Maliki in Moscow , Lavrov commented on the U.S. announcement it will withdraw its troops from Syria, as saying: “their withdrawal is a step in the right direction”.

Lavrov says he wants to see implementation, as well as the hows and whys. ”  It is necessary to wait for what will happen after this announcement. As I know, there are many questions within the United States about this.”

On Wednesday, White House press secretary Sarah Sanders said that Washington had begun to pull troops out of Syria.

Lavrov expressed his country’s concern over attempts to undermine and foil the bases and  international references in the settlement of the Palestinian issue, including  the United Nations binding resolutions.

Russian Foreign Minister Sergey Lavrov and his Sudanese counterpart al Dirdiri Mohamed Ahmed have discussed the situation in Syria during a telephone conversation.

“During the talks, the parties exchanged views on regional issues with a focus on the settlement of the crisis in Syria,” the Russian Foreign Ministry said in statement on Friday.

Bolstering political, economic and trade cooperation between Russia and Sudan was also discussed.