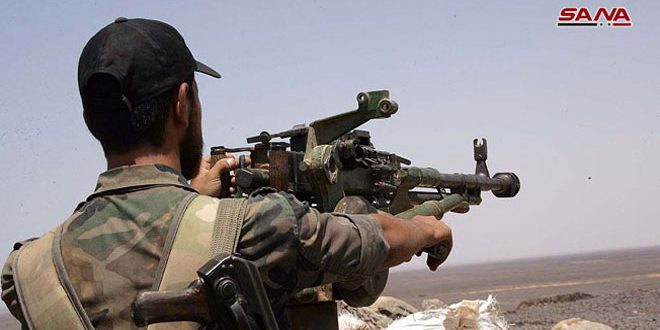 Those terrorist groups repeatedly renew their attempts to attack and infiltrate into military points centered  in the vicinity of safe villages and towns in Hama countryside, breaching  the demilitarized zone agreement in Idleb.

SANA reporter said that an army unit on Monday targeted with appropriate weapons members of a terrorist group liked to “Turkistan Party” organization who infiltrated from the vicinity of Khirbet al-Naqus village in the far north of al-Ghab plain towards a military post in the area.

The army’s unit operation resulted in foiling the infiltration attempt, destroying terrorists’ positions and killing and wounding many of them, the reporter added.

Terrorist Abdul Sattar Mohammed al-Qweism, a field leader was identified among the injured .

An army unit centered in Mhardeh eastern countryside targeted with light machinegun weapons a terrorist group affiliated to “al-Ezza Battalion” positioned on the outskirts of Ma’rkabeh after its members targeted a military point  with  sniper fire.

In the northwestern suburb of Mhardeh , the reporter pointed out that army units confronted terrorist groups with automatic weapons while trying to infiltrate from the village of al-Jesat and Tel al-Sakher towards military points in the area, killing a number of terrorists.