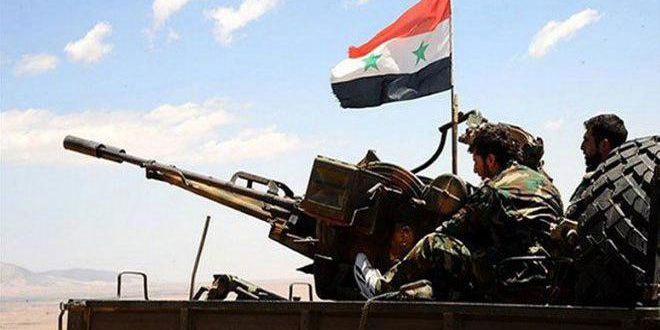 Hama, SANA- Units of the Syrian Arab Army on Friday thwarted terrorist groups’ infiltration attempts towards the safe areas and army points on the outskirts of the demilitarized zone in Idleb from several directions.

The army units responded with suitable weapons and inflicted heavy losses upon terrorists in personnel and equipment.

In Hama, SANA reporter said, an army unit destroyed mortars launching pads and machine guns for terrorists in the villages Lahaya and Ma’rkebeh  in retaliation for targeting a military point with explosive bullets and machineguns in the northern countryside.

One of the army units centered in Al-Masasneh direction combed areas of agricultural lands in the vicinity al-Latamina town after tracking terrorist group linked to the so-called “Al-Ezza Brigades” trying to infiltrate into military points stationed in the area.

To the north of Maharada area in the northwestern countryside, units of the army directed concentrated strikes with medium machineguns on launching pads and fortified positions of the terrorist groups in the towns of Al-Arbaeen, Al-Zakat, Tal Al-Sakher and Hasraiya.

As part of the high alert of the army units operating on the outskirts of the demilitarized zone, an army unit combed the villages of Skaik and al-Khwain, east of Ma’aret al-Nu’man, after monitoring movements of Jabhat al-Nusra-linked terrorist group while trying to attack military points in the area.