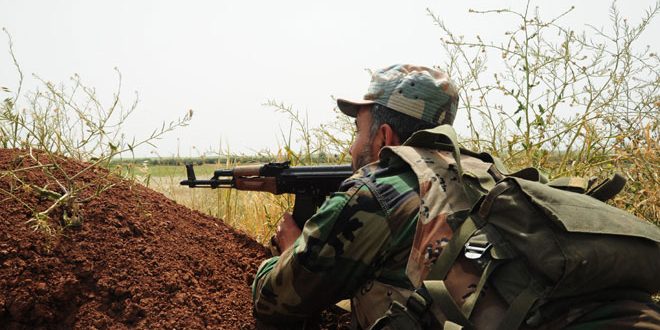 SANA’s reporter in Hama said that an army unit tracked the terrorist organizations’ movements in the southern parts of Latimineh city and conducted concentrated strikes against them while they were attempting to infiltrate towards the military posts in the surroundings of al-Zalaqiyat village, inflicting heavy losses upon the terrorists’ ranks.

To the north of Maharda city, an army unit in the area surrounding al-Hamamiyat village targeted with artillery strikes the terrorist organizations while they tried to infiltrate from the surroundings of al-Jaisat and Tal al-Sakhir towards the military points, killing and injuring many of the terrorists, the reporter said.