Putin: Chemical attack carried out by terrorists on Aleppo must not go unpunished 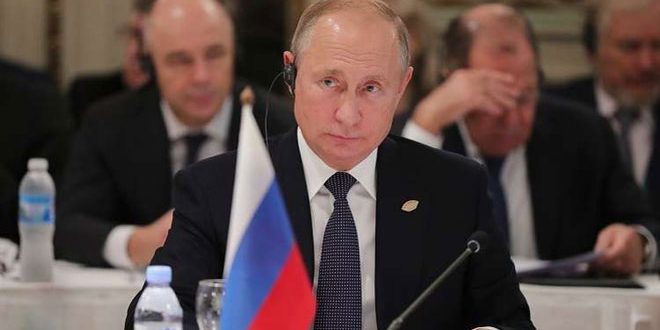 Buenos Aires, SANA – Russian President Vladimir Putin said that the chemical attack carried out by terrorists on the city of Aleppo must not go unpunished.

During a meeting of the leaders of BRICS member states on the sideline of the G20 Buenos Aires summit on Friday, Putin said that militants in Syria continue to attack government forces’ positions, and the attack they carried out against Aleppo city on November 24 using toxic chemicals is a blatant violation.

“Tens of civilians including children were injured due to the attack… such terrorist crimes must not go unpunished, otherwise they will repeat them,” he said.

The Russian President warned about using double-standards or middle-of-the-road solutions in dealing with terrorism, stressing that exploiting them to achieve geopolitical goals is unacceptable as this benefits terrorists who will commit more atrocities.

Putin stressed the need to bolster the political process for resolving the crisis in Syria, which is why Russia is working with Iran and Turkey through the Astana formula to reach a true political settlement and form a committee to discuss the Syrian constitution as soon as possible.