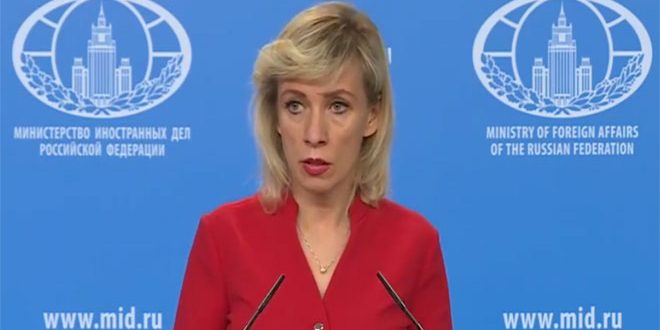 Moscow, SANA _ Plans of terrorists in Syria to undermine cooperation in the Astana format and derail agreement on Idleb are futile and doomed to failure, Russian Foreign Ministry Spokeswoman Maria Zakharova said at a briefing on Friday.

Zakharova reiterated that on November 24 terrorists of Jabhat al-Nusra carried out a mortar attack on Aleppo’s residential quarters with shells and chlorine, injuring more than 100 people.

She said that such terrorist works were conducted before to provoke the US-led “coalition” to carry out massive strikes on the Syrian forces, “but now, as we can see, the goal is different: to derail the implementation of Idleb Agreement and destabilize cooperation in the Astana format,|”

The Russian Diplomat added that the new Astana meeting  on Syria “proved that such plans of terrorists are futile,”

” The situation in Idleb is explosive despite the agreement reached last September 17; terrorists are doing their best to derail its implementation,” Zakharov said, concluding that “the scale of provocations carried out by them is unfortunately growing.”