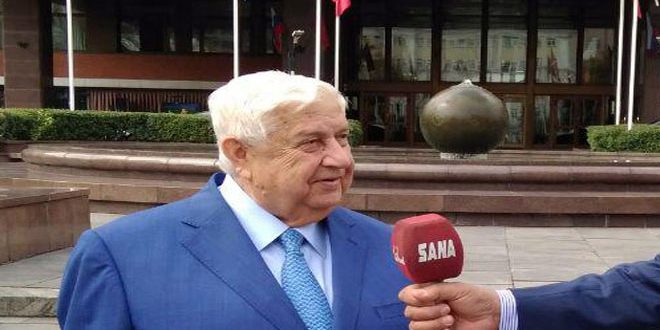 Moscow, SANA- Deputy Prime Minister, Foreign and Expatriates Minister Walid al-Moallem expressed his satisfaction with the outcomes of his talks with the Russian officials, describing them as fruitful and constructive in both political and economic fields.

Speaking to SANA’s reporter in Moscow on Friday, al-Moallem said that the Russian friends are determined to support the efforts of Syrian armed forces in combating terrorism and putting an end to the crisis in Syria, while the West led by the US seeks to block these efforts and protect Jabhat al-Nusra as it has already provided protection for Daesh (ISIS) in order to prolong the crisis and to dominate the area of East Euphrates.

“All Washington acts are illegal and outside the framework of the UN Security Council. Therefore, as we did in its previous aggression, we will respond with full force to its potential aggression,” al-Moallem said, noting to the Russian warnings to the West not to play with fire.

On the talks with the Russian Deputy Prime Minister Yury Borisov, the Minister said that the Russian government has called large Russian companies to participate heavily in the 60th edition of Damascus International Fair.

He added that the joint talks focused on the strategic partnership in its economic dimension, noting that Russia wants to contribute to the reconstruction programs and the economic production in Syria.

2018-08-31
Manar
Share
Previous Lavrov: The Syrian government has sovereign right over its territory
Next Press conference by Dr. Bashar al-Jaafari at the UN HQ in New York