Lavrov: The Syrian government has sovereign right over its territory 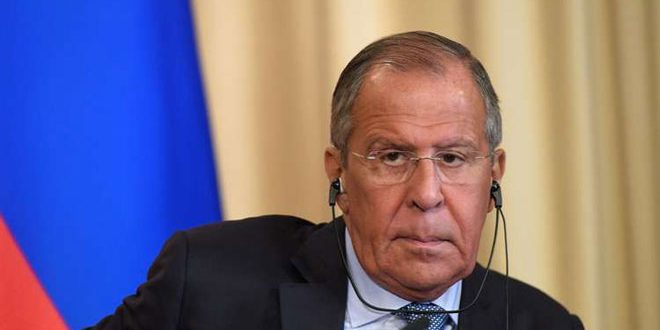 Sochi, SANA – Russian Foreign Minister Sergey Lavrov affirmed that the Syrian government has the sovereign right over its territory, pointing out that Russia supports all efforts to resolve the crisis in Syria in accordance with the UN Security Council resolution no.2254.

In a press conference with his Eritrean counterpart Osman Saleh, Lavrov said that terrorists are preparing to use chemical weapons in Idleb to accuse the Syrian government of doing so.

He pointed out that the Western countries prevented the arrival of representatives of the Organization for the Prohibition of Chemical Weapons (OPCW) to Syria to investigate allegations of the use of chemical weapons.

The Russian top diplomat said that Moscow has informed the United Nations and the OPCW with information on the use of chemical weapons, as it warned them to bear the responsibility of this provocation which had been used in a smilar way over the past two years.

Lavrov said that terrorists are using civilians in Idleb as human shields, calling for the separation of “armed opposition” from terrorists of Jabhat al-Nusra and other terrorist organizations.