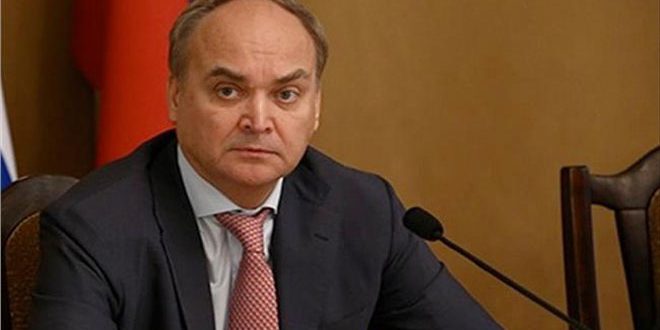 Washington, SANA- Russia’s Ambassador to the United States Anatoly Antonov warned against launching a new aggression against Syria, affirming that this would serve the interests of the terrorist organizations.

In a statement quoted by Sputnik Agency on Thursday, Antonov noted that during his meeting with representatives of the US Department of State on August 27th, he expressed his country’s concern over the US threats to launch a new illegal aggression on Syria under the pretext of the possibility of using chemical weapons.

The Russian ambassador said “We warned the US against launching a new baseless and illegal aggression on Syria,” affirming that only terrorists will benefit from that.

He announced that he urged the US side to propose the facts on the basis of which they have issued statements on possible use of chemical weapons by Syria in Idleb province.

2018-08-30
ruaa-jazaeri
Share
Previous Roman amphitheater in Jablieh city, Lattakia
Next (Tell Me about My Homeland) Operate at Dar al-Assad