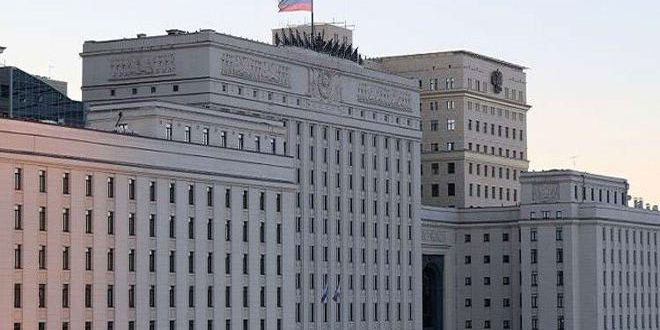 Moscow, SANA-Russian Ministry of Defense revealed confirmed information on that Jabhat al-Nusra terrorist organization and the affiliated groups are readying a chemical attack against civilians in Idleb province to accuse the Syrian forces.

Russian Defense Ministry spokesman, Major General Igor Konashenkov said in a statement on Saturday that according to confirmed information by several independent sources, 8 canisters of chlorine were delivered in to a village near Jisr al-Shoughur city  to stage a chemical attack by terrorists of Turkistan party and Jabhat al-Nusra.

The Russian military official stressed that the alleged chemical attack will be carried out with the participation of the British intelligences and will be used by the US, Britain and France as a pretext for launching an aggression on the Syrian state and its economic facilities.

He added that the information from Idleb affirm that a group of terrorists trained by the British private company of Olive arrived in Jisr al-Shoughur to participate in playing the role of volunteers who  will simulate a rescue operation involving locals purportedly injured in the attack which they prepare to launch in Idleb.

Meanwhile, Russian Foreign Ministry reaffirmed that Western and Middle Eastern states are achieving their interests in the region through the “obnoxious provocations” by terrorists who are using chemical weapons in Syria.

In a statement published by Russia Today website, the Ministry strongly condemned the joint statement recently issued by the US, France and Britain, indicating that it is clear from a long time that the obnoxious operations carried out in some Syrian areas, are perpetrated by Daesh (ISIS) and members of the so-called “moderate opposition” and nongovernmental organizations which serve their interests such as the “White Helmets”.

The Russian Foreign Ministry expressed regret for exploiting these “obnoxious operations” by Washington, London and Paris to implement their destructive scheme which aims at distorting the image of the Syrian leadership.

The statement added that for achieving that scheme a large group of the Western and Middle Eastern states resort to provocations such as the chemical attacks.

The statement noted that the operation carried out by Western states which urgently smuggled members of the so-called “White Helmets” from Syria in coincidence with the advancement of the operation of liberating the Syrian territories from terrorists was not by chance as it aimed at hiding the truth of their main goals and their criminal activities.

The Russian Foreign Ministry reiterated that what takes place regarding the allegations on using chemical weapons in Syria is related to the attempts of Western states to achieve their geopolitical ambitions in the region.

“In the same context, we look at the relentless attempts to transform the Organization for Prohibition of Chemical Weapons (OPCW) which enjoys a purely technical nature into a tool for exerting political pressures,” the Ministry said.

At the conclusion of its statement, the Ministry called upon those who pretend that they defend the interests of the Syrian people and their Takfiri allies who adopt this approach to stop to exploit the issue of chemical weapons to exert pressure on Syria and its allies.

2018-08-25
ruaa-jazaeri
Share
Previous Russian Deputy Foreign Minister Sergei Ryabkov: The West searches for new pretexts against Syria, and Russia is ready to deal with these scenarios and to divulge them.
Next Army establishes control over more areas in Sweida countryside