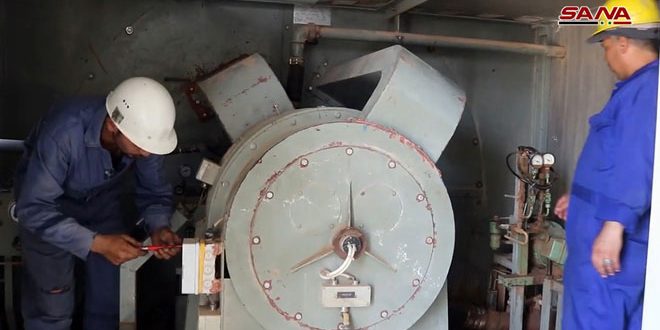 Deir Ezzor, SANA- Depending on national expertise, the rehabilitation of the first gas group in al-Taim Field was completed with the aim of supplying the electrical system in Deir Ezzor with a new electrical source that ensures a stable flow of power in the province.

General Manager of al-Taeem Facility, Tarek al-Okla, said that the re-operating of the first gas group with a capacity of 30 MW in al-Taim field took about three months depending on the national expertise which accelerated the pace of the return of electric power on the one hand and saved large sums of money on the other.

He added that the total cost of the repair work amounted to about SYP 6 million, while the cost of buying a new gas group is EUR 25 million.

He pointed out that the workshops are currently working to rehabilitate the second group with a capacity of 30 MW to be put into service soon in preparation for the launch of maintenance works in the third group respectively, until the station is fully rehabilitated.

In September, the Syrian Arab Army units restored control over al-Taim oil field in the southwestern countryside of Deir Ezzor after eliminating Daesh gatherings in it.

al-Taim oil field Deir Ezzor 2018-07-26
Manar
Share
Previous Al-Moallem: Syria going ahead in fighting terrorism, army to liberate all territories
Next “Businessmen and Investors in Syria and the World 2018” Conference kicks off in Damascus