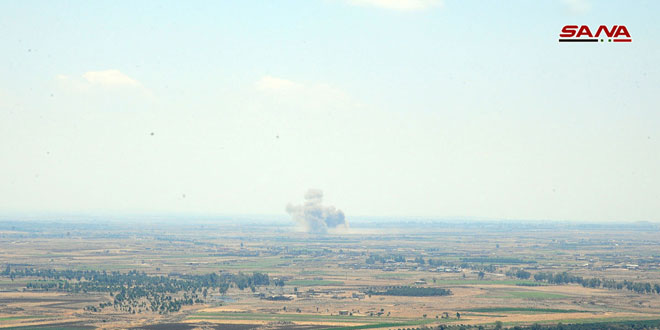 SANA’s reporter in Daraa said that the Syrian Air Force carried out raids on terrorists’ gatherings in the area surrounding Tal al-Jomo’a, Tsil and Jilin villages in parallel with accurate artillery strikes on terrorists’ dens in Yarmouk Basin Region to the far southwest of Daraa adjacent to the Occupied Golan.

The reporter added that the strikes led to the destruction of fortified points and rocket launching pads in addition to cutting off terrorists’ supply routes in the area.

Army units advancing from the direction of Tal al-Jabia are currently engaged in sporadic clashes with terrorist groups who are desperately trying to maintain their points of deployment using sniper bullets, missiles and machine guns to obstruct the progress of the army units.

2018-07-23
Manar
Share
Previous Foreign Ministry: Smuggling hundreds of “White Helmets” by Israel in cooperation with other states discloses their support to terrorism
Next Field hospital discovered in Nabaa al-Skhar, Qunietra